Goodbye February, we’ll miss you…top 5 all time for cold and snow! March is in like a roaring lion needing an electric blanket! 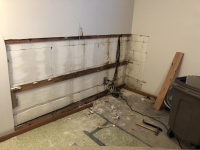 is water damage in our basement, my office, from the rainfall received in mid-January. A personal dwelling policy covers ‘clean water’ damage, water from w/in the dwelling; a dwelling policy does not cover ‘brown’ water or water from outside the structure. Only a flood policy would cover this damage and flood policies typically have a waiting period before they become effective. Lesson here, make sure all piping attached to the rain gutter downspouts designed to carry away from structure are connected! Thankfully, the damage wasn't worse...

2019 spring prices – RMA has released the 2019 projected revenue prices only for dry pea types at this time. RMA has not yet released the 2019 projected harvest revenue prices for other spring crops (barley, canola, corn & soybeans). The chart below captures the average prices for the discovery period of these crops, I don’t anticipate a significant variance from the average to official prices when released. I’ve also included last fall’s announced prices (canola & wheat) for your reference as well. The far right column is the volatility factor; this value measures the price fluctuation of the past 5 trading days, and has a direct impact on the premium for the crop year. Please let us know if you have any questions regarding. 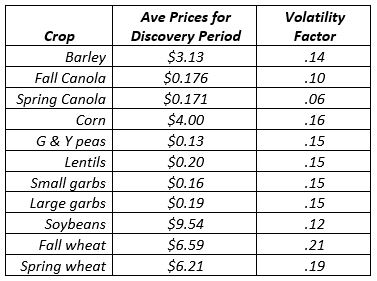 3/15/2019 – Sales closing date for spring crops is at hand. As is the case with all sales closing dates, any and all changes must be completed by this date, which is a week from Friday. Changes include coverage level, plan of insurance, entity changes (adding or deleting members), etc. If you have any questions or concerns pertaining to this, please don’t hesitate to contact us.

Greenhouse gases – A recent EAT-Lancet study and the proposed Green New Deal are concerning, but should be viewed with skepticism according to Frank Mitloehner, an air quality specialist at the University of California-Davis.

And along these lines, Mr. Palmer suggested practices to prevent resistance…if you missed it, you can follow their lead here

Income taxes – The IRS has extended 3/1 filing deadline until 4/15.

Livestock losses – If you’ve incurred any livestock losses due to weather, you may qualify for Livestock Indemnity Program (LIP). Application must occur w/in 30 days of loss and documentation must be provided, dated photos would suffice. Please contact your local FSA office for details and application procedures.

Conflicting stories regarding the US farm economy - Economists say things aren’t that bad, the other reports that delinquencies are at a nine year high. Can it be both?

Livestock – The annual cattle inventory report found slightly more animals than last year at 94.8 million head. The 2018 calf crop was up 2% at 36.4 million head. US producers are already losing market access due to reduced tariffs produced by TPP. Grains and particularly wheat is on deck.

US Treasuries – 3 year low on sales, is a rate reduction on the horizon?

Wheat – Calling the February markets ugly would be a glamorizing the adjective. Significant losses for both Chicago ($.64) and Kansas City ($.58) markets occurred, whereas Minneapolis was off only $.03. Given the winter weather for the predominately growing region of hard red spring wheat, the Minneapolis market will continue to trade differently than the other boards – there will not be an early spring given the depth of frost and snow across the northern plains. Here’s the short-term for Bismarck…

WTO – A ruling was handed down on Thursday confirming the long held US allegations that the Chinese government was excessively supporting their farm producers.

Senior living – The ten riskiest states for senior living according to TheSeniorList.com were identified according to 5 matrix. Not to split hairs here, but when did Washington DC become a state? My geography class identified the US with fifty states and the District of Columbia…just sayin’

Worms making water out of poop – Regardless of your take on the subject matter, one must admit this is a pretty cool step in technology.

Weather – The forecast maps for next week don’t support an early end to cold temperatures.

WOTUS – Lines are drawn; those opposed and supporting are taking their respected positions.

Worker Protection Standards – We’re in the planning stages of providing training to get those interested EPA approved. Please advise accordingly so we know who and where – coordinate with your account managers or with us in the absence of an account manager.

Until next time, stay warm…